Since Sam Brownback backed out of the presidential race, I was invited to sit down and chat with Gov. Mitt Romney last week in Greenville. I’ve decided to support his candidacy and will serve on SC’s Romney for President. He will be in Anderson on Tuesday (11/6) at 5:45 at the Main Street Deli.

When Mitt Romney took office, Massachusetts had a $2 billion dollar budget, now there are $500 million in trust funds. This astronomical feat was done by reducing waste in government and growing the economy with tax cuts. Spending only grew about 3%. Gov. Romney explained to me some specific savings in their Medicaid Prescription plan, efforts I’ve been working on myself.

Let’s be honest, the mother’s milk of politics is money. You can have the best message in the world, but you’ve got to convey that message to the voters. If you are reading this post, you are (like me) a political junkie that will do your own research. Unfortunately the masses do not investigate. The Romney team is a well oiled machine; better organized than any other campaign I’ve ever seen. 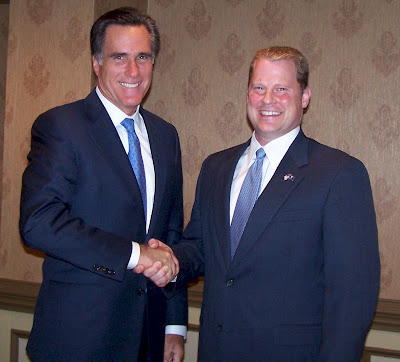